We Dig Worms- A Primer on Worms and Vermicomposting 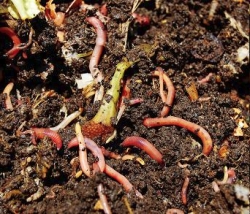 Vermicasting, also called vermicomposting, is the processing of organic wastes through earthworms. It is a natural, odorless, aerobic process, much different from traditional composting. Earthworms ingest waste then excrete casts – dark, odourless, nutrient- and organically rich, soil mud granules that make an excellent soil conditioner. Earthworm casts are a ready-to-use fertilizer that can be used at a higher rate of application than compost, since nutrients are released at rates that growing plants prefer.

Vermicasting can be done on a small scale by homeowners with household organic wastes, on a large-scale by farmers with manure or by the food industry using organic wastes such as fruit and vegetable cull materials. Through proper design, vermicasting is a method of waste handling that:

Vermicast does not need curing, but fresh casts undergo 2 weeks of nitrification where ammonium transforms to nitrate, a form that plants can uptake.

Use organic materials that meet the earthworm's feed preferences, including a material density of 350–650 g/L.

Worms should not be crowded, so the ideal stocking density is 150 earthworms/L of wastes.

If you discover earthworms trying to escape any system, it is a good indication that something is wrong with their feed or environment.

Earthworms should be allowed about 1 week to migrate from finished vermicast to fresh waste.

Vermicast nutrient content varies with earthworm feed type, but feeding waste to earthworms does cause nitrogen mineralization, followed by phosphorous and sulphur mineralization after egestion. A typical nutrient analysis of casts is C:N ratio 12–15:1; 1.5%–2.5% N, 1.25%–2.25% P2O5 and 1%–2%, K2O at 75%–80% moisture content. The slow-release granules structure of earthworm casts allows nutrients to be released relatively slowly in sync with plant needs.

Ammonium is the main contributor to salinity levels. Earthworms are repelled by salinity levels above 5 mg/g. Therefore, if the starting material is low in salt, the resulting vermicast will be as well. In fresh vermicast, ammonium mineralized in the earthworm gut is nitrified over 2 weeks.

Pathogen levels are low in vermicast, which is considered a Type A biosolid when excreted by earthworms. This is a lower pathogen level than in typical composts. Vermicast is low in pathogens because earthworms consume fungi, and aerobic bacteria do not survive low oxygen levels in the gut. Low pathogen levels could also be due to the fact that vermicasting does not build up heat, which allows disease-suppressing organisms to survive the vermicasting process and outcompete pathogens.

Earthworms are epigeic (surface dwellers), endogeic (burrow up to 15 cm deep) or anecic (burrow vertical channels, about 1 m deep). Epigeic earthworms such as Eisenia fetida (red wigglers) are the best adapted to ingest organic wastes. Earthworms can double their population in 60 days.

Red wigglers can consume 75% of their body weight per day. Earthworms weigh about 0.2 g and require oxygen and water, both exchanged through their skin.

The ideal feed for earthworms is food or animal waste and fresh, green, plant waste, rich in nitrogen or precomposted (for up to 2 weeks to make it easier to digest). Ideally, earthworm feed has a 25:1 carbon-to-nitrogen (C:N) ratio and a pH between 6.5 and 8 (close to neutral) – sudden pH fluctuations repel earthworms.

moist, but not wet: 75% moisture is ideal, like wet soil at field capacity (earthworms migrate out of wet materials)

not salty: below 0.5% salinity – higher is too toxic

devoid of toxins such as de-worming medicine, detergent cleansers, pesticides and tannins

Earthworms have eye-cells on their skin that trigger pain when exposed to any light but blue light, keeping them underground during daylight. They will try to leave any material if it does not meet their feed requirements, but if a light is shining at the surface of the material, they will stay where they are.

This article was originally posted on the Ontario Ministry of Agriculture, Food and Rural Affairs website.